If you're looking for a holiday gift for under $100 that will make your sports fan stand up and cheer, check out these from Steiner Sports (www.steinersports.com), or if you are in the mood stop by the Steiner Stores at Yankee Stadium in the Bronx for a wintry fly ball orRoosevelt Field Mall in Garden City, Long Island, if you're in the neighborhood.

Get Motivated: Notre Dame 1988 National Championship Collage with Replica Game Tickets Now 68% OFF! ONLY $69.99 - Includes photograph of the tunnel leading out to Notre Dame's field and Coach Holtz's Motivational Sign "PLAY LIKE A CHAMPION TODAY"

Mariano Rivera Framed New York Yankees quote reads "I would love to say that it has been a privilege and honor to wear the pinstriped uniform that I have proudly worn for so many years in good times, great times. It has been wonderful."

Here is the complete list of coasters from Steiner: New York Yankees Baseball with Logo and Certified Authentic Field Dirt - Set of 4 (Have other MLB teams including: Chicago Cubs, Baltimore Orioles, Boston Red Sox and others) $49.99

A signed copy of No More Vietnams by Richard Nixon from college coaching immortal Bobby Knight’s book collection, and baseball’s signed on the “sweet spot” by Hall of Famers Walter Johnson, Joe DiMaggio and Honus Wagner Were also in the Fall Classic Auction. 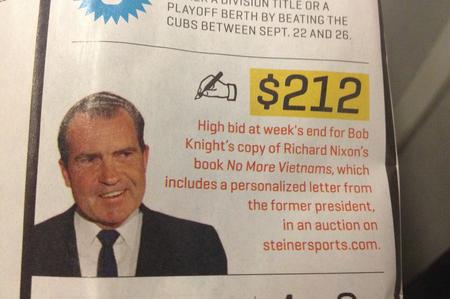 An authenticated ticket stub from Wilt Chamberlain's famed 100-point game (March 2, 1962), is the lynchpin artifact of the featured pieces in the Wilt Chamberlain collection available on the Steiner Sports Memorabilia (www.steinersports.com) on-line Fall Classic Auction, which continues through October 10.

Although many thousands have claimed to be at the game, in fact only 4,124 fans were at the contest, played in Hershey, Pa.Muhammad Ali memorabilia, from the collection of best-selling author Jeffrey Gitomer, also highlight the collectibles andinclude: an autographed canvas of Ali with the Olympic Torch painted by sports artist Stephen Holland, inscribed Ali boxing gloves, one of which is signed, and a Cassius Clay autographed index card (pre-1964 before “The Greatest” changed his name to Ali).

This Sunday, September 22, will be another milestone day for the greatest closer of all-time when Yankees Steiner Collectibles presents “Mariano Rivera Thank You Fans Photo Day,” and the Bombers face the World Champion San Francisco Giants in a matinee affair at 1:05 PM.

All fans in attendance will receive a Limited Edition photograph from Mariano. Rivera is pictured tipping his cap to the Stadium crowd, and the photo is inscribed “Thank You Fans Mariano Rivera.”

In celebration of Rivera’s farewell season, Yankees Steiner Collectibles has a bevy of Mo memorabilia and artifacts available to his legion of fans in every price category. Steiner has over 25 MLB licensed Rivera products, and sales are “through the roof, as people across the country are showing their love for Mariano,” says Steiner.

In all, 63 artifacts from the Farwell Collection will benefit the Rivera Foundation.

The auction begins today and will continue through December 9, it was announced by Steiner Sports FounderBrandon Steiner.

In addition, a "fearsome foursome" of artifacts, and much more, from the collection of the immortal Los Angeles Rams Hall of Famer Deacon Jones, will be featured. The dazzling quartet of lynchpin collectibles includes:Deacon's 1980 Hall of Fame ring; his rare 1966-67 Rams defensive playbook with strategies from the gridiron coaching icon George Allen; and his 1968 and 1969 Most Valuable Player trophies. There are a total of 24 artifacts from the Deacon Jones collection registered.

Visit http://auction.steinersports.com/ for more information and to bid on the Steiner “Coast to Coast Legends” on line auction, or call Steiner Sports at 914-307-1000. 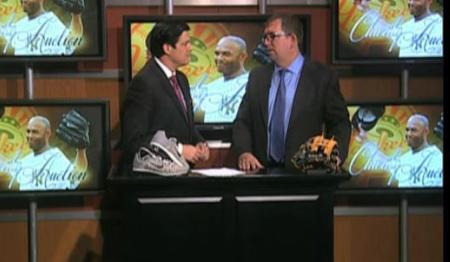 A "fearsome foursome" of artifacts, and much more, from the collection of the immortal Los Angeles Rams Hall of Famer Deacon Jones, spearhead the Steiner Sports Memorabilia "Coast to Coast Legends" on line auction.  The dazzling quartet of lynchpin collectibles includes: Deacon's 1980 Hall of Fame ring; his rare 1966-67 Rams defensive playbook with strategies from the gridiron coaching icon George Allen; and his 1968 and 1969 Most Valuable Player trophies. There are a total of 24 artifacts from the Deacon Jones collection registered.

The auction begins today and will continue through December 9, what would have been the 75th birthday of the late, great defensive end. Ironically, Jones wore number 75. The announcement was made by Steiner Sports Founder Brandon Steiner, and Elizabeth Jones, Deacon's wife who continues his legacy.  A portion of the proceeds from the collection are earmarked for the Deacon Jones Foundation, which assists inner-city communities and develops future leaders. Mariano Rivera Farewell Collection: The biggest stars in baseball paid homage to all-time closer Mariano Rivera – three dozen of his contemporaries including World Champion Red Sox David Ortiz and Dustin Pedroia, Yankees teammates Andy Pettitte, CC Sabathia, Ichiro Suzuki and Alfonso Soriano, and Lakers stars Magic Johnson and Kobe Bryant – by contributing signed memorabilia to benefit the Mariano Rivera Foundation, which will also highlight the auction. In all there are 63 collectibles from the Mariano Rivera Farewell Collection.

Visit http://auction.steinersports.com/ for more information and to bid on the Steiner “Coast to Coast Legends” on line auction, or call Steiner Sports at 914-307-1000.

ABOUT THE DEACON JONES FOUNDATION: The Deacon Jones Foundation is committed to developing leaders...young, educated, talented, intelligent, accomplished people, who understand their commitment to the inner-city communities from which they come, and have the tools and the desire to return...to give back of their knowledge; to help those less fortunate; to help stem the cycle of inner-city strife and continuous depreciation of neighborhoods; to be positive role models for others to emulate; and to continue the process that the Deacon Jones Foundation has begun.

​Exit Sandman, Enter Mariano Aficionados! The legion of fans belonging to baseball’s all-time closer will get the chance of a lifetime to spend “An Evening with Mariano Rivera” hosted by Steiner Sports and presented by Mohegan Sun at the Times Center in New York City on Tuesday night, November 26.

Steiner Sports is the Official Memorabilia Partner of Mariano Rivera and the New York Yankees.

About Mohegan Sun: Mohegan Sun, owned by the Mohegan Tribal Gaming Authority, is one of the largest, most distinctive and spectacular entertainment, gaming, shopping and dining destinations in the United States.  Situated on 185 acres along the Thames River in scenic southeastern Connecticut, Mohegan Sun is within easy access of New York, Boston, Hartford and Providence and located 15 minutes from the museums, antique shops and waterfront of Mystic Country. More information is available by calling 1.888.226.7711 or visitingmohegansun.com. Connect with us on Facebook, follow us on Twitter, like on Pinterest and view us on YouTube. 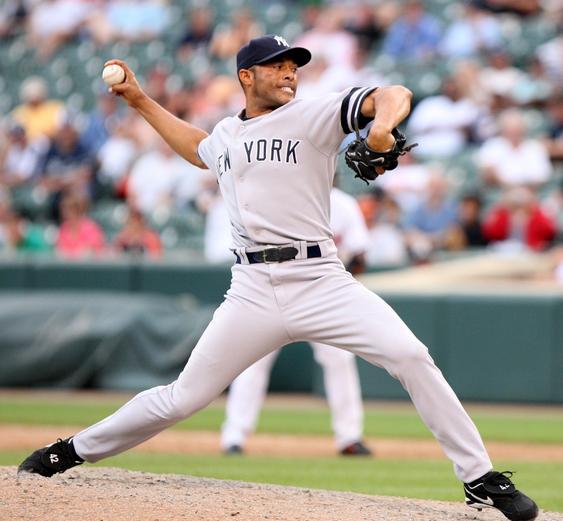 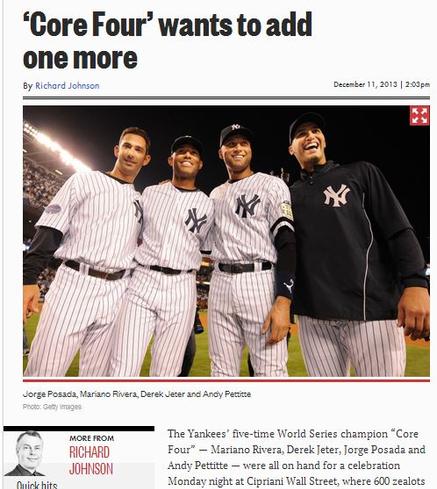 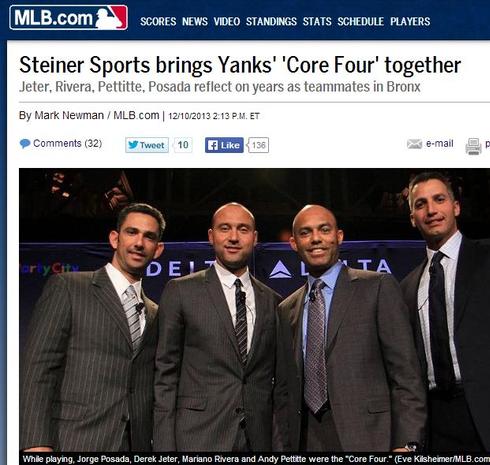 More than 600 avid Yankee fans attended the Core Four event presented by Steiner Sports at Cipriani Wall St last night. Fans listened with rapt attention all evening long as MC Brandon Steiner, the president of Steiner Sports, and the Core Four shared some of their favorite memories in an intimate setting. Also present at this once in a lifetime event were members of the 1977/78  World Series Championship team including Reggie Jackson, Lou Piniella, Bucky Dent, Goose Gossage, Graig Nettles, Roy White and Mike Torrez. Guests enjoyed a three course meal and got to hear Jorge Posada, Mariano Rivera, Derek Jeter and Andy Pettitte all reminisce fondly on their time in pinstripes.

​The “Classic Quintet” will all be available to sign autographs, pose for photographs, and to meet & greet fans at the designated times below. Tickets, starting at $49, as well as VIP packages and memorabilia are all available. For tickets and more information call the Steiner Store at 516-739-0580 or 800-242-7139.

​After almost eight years, the Leonard-Hearns rematch finally happened. It was promoted as "The War". Leonard (35-1 with 25 KOs) and Hearns (46-3 with 38 KOs) met on June 12, 1989 at Caesar's Palace in a scheduled twelve-rounder for the WBC & WBO super-middleweight titles. Though Hearns had Leonard on the canvas twice, the judges scored the fight a draw, with both boxers retaining their respective titles. The decision was soundly booed, as most felt that Hearns had won.

Hearns and Duran fought only once for the WBO Super Welterweight championship. That was a dominating performance by the Hitman, who dropped Duran twice in the first round. After nailing Duran with a devastating right to the jaw in the second round, Hearns stepped back and Duran fell face first to the canvas. The fight was over.​​

One of the greatest Yankees, as well as one of baseball’s best, Derek Jeter, will be saying goodbye to the game at season’s end. What better way to bid him farewell than by attending “The Captain’s Farewell: Derek Jeter Live at the Hudson Theatre” hosted by Brandon Steiner and Steiner Sports. On Monday, September 22, from 12 noon to 2:00 pm, just three days before Jeter’s final home game at Yankee Stadium, he will be joined by Brandon Steiner at the historic Hudson Theatre in the Millennium Hotel (145 W 44th St, New York, NY 10036) in midtown Manhattan for a special event and impactful Q&A that will commemorate his great career and time with the New York Yankees. Tickets start at $149. The packages are all listed at the end of the release.

For more information and tickets go onto http://www.steinersports.com/events.html

Event Prices: Starting at $149; VIP packages that include a luncheon and memorabilia also available.

The Balcony:
One Balcony Ticket to Derek Jeter Q&A Including
One Jeter Subway Sign
One $25 Steiner Sports Gift Card
(does not include Luncheon)
Price $149

The Mezzanine:
One Mezzanine Ticket to Derek Jeter Q&A
One Jeter Canvas Print
One $25 Steiner Sports Gift Card
(Does not include Luncheon)
Price: $249

Clutch Package with Product:
Two Tickets to the luncheon and Jeter Q&A
One Photo op with Derek Jeter for you and your guest
One Limited Edition Derek Jeter Signed piece
$2,500 per package

Clutch Package (without Product)
Two Tickets to the luncheon and Jeter Q&A
One Photo op with Derek Jeter for you and your guests
$2,000 per package

A rare Jackie Robinson baseball glove worn in the Brooklyn Dodgers 1955 and 1956 World Series (his final season) sold for $373,002 on the Steiner Sports Memorabilia "Ground Breaking" on line auction last night, it was announced by Steiner CEO Brandon Steiner. 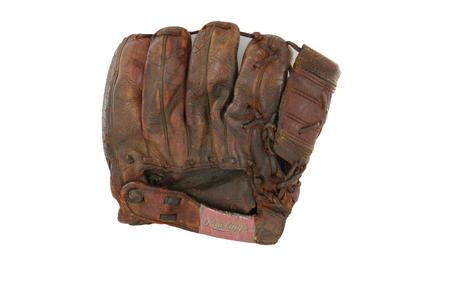 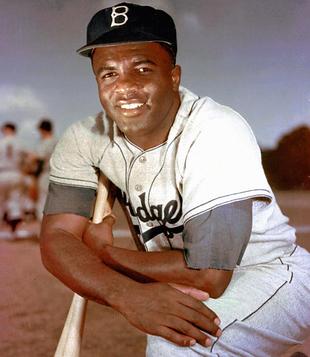 The uniform (#18) worn by Yankees right-hander Don Larsen for the only Perfect Game pitched in World Series history (1956) sold at auction last night (December 5) for $756,000 on line at Steiner Sports Marketing and Memorabilia’s “Perfect Auction.” The championship ring collection of legendary college basketball coach and ESPN analyst Bob Knight sold for a combined $400,000.

Yankee Hall of Fame legend Mickey Mantle’s original signed contract for the 1960 season will go on the auction block with proceeds donated to the Hurricane Sandy New Jersey Relief Fund, chaired by Mary Pat Christie, wife of New Jersey Governor Chris Christie. The formal announcement was made today at the Yogi Berra Museum and Learning Center by Steiner Sports Memorabilia, and Danny and David Mantle, Mantle’s sons, on behalf of the Mantle Family.  The on line Steiner “Ground-Breaking Auction” at  http://auction.steinersports.com/ gets underway on May 1 and concludes on June 2. 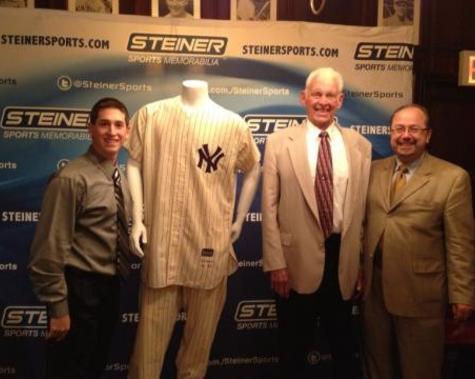 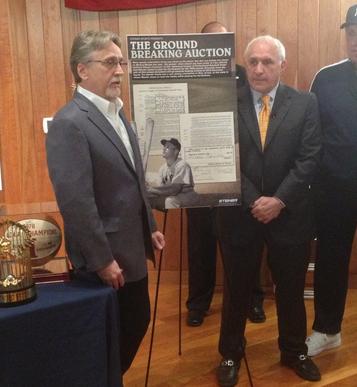